Nothing new under the sun for Greece.

The latest casualty in the Eurozone is Greece, which is hardly news any more. They follow behind a growing list of countries (Spain, Italy, Ireland, Portugal, Cyprus) that have systematically extended themselves without any realistic expectation of recovery by doing the same things that got them into this mess. This quote from The Telegraph offers up some of the harsh truth:

“Greece is in a large amount of debt following years of living beyond its means; public spending soared in the past decade and public sector wages doubled during the period. However, as the government upped its spending, tax income was hit because of widespread tax evasion (a large percentage of the population is self employed). So when the global financial downturn hit, Greece was not equipped to cope.”

The question for investors here in Canada is what does it mean for us, or more specifically for my portfolio? Most of Greece’s $395 billion dollar debt is held by other countries in the Eurozone. A very small percentage is held by North American Investors. However, that is not to say we are immune, because some of the debts of those other European countries may be held here in North America too, and if they can’t pay their debts because they haven’t been paid by Greece, we could be in trouble too. Still, it’s not enough to be alarming for us, because North American exposure is minimal.

My philosophy has always been to invest in what you know and where you know, which is why I have always advised my clients to limit exposures in markets that have the added risk of currency exchange, difficult political climates, and geographically sensitive environments. The how is easy because we simply choose investments that avoid those sorts of markets  – right?

Let’s look at three funds, the first one is a Canadian Equity, the second is a Global Equity, and the third is Global Discovery (which is still an equity fund). As the names would imply, one focuses on the Canadian market and the other two on the Global. Let’s take a look at the composition: 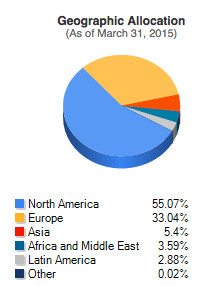 Can you tell which one is a Canadian Equity Fund and which are the two Global? Selecting the right investments is not as simple as looking at the name of the fund and the performance history.  For the record, Fund B is the Canadian one. Building a portfolio of funds makes things even more interesting! If we were to pick two of the above funds – say A & B, and allocate 70% to the Canadian fund, and 30% to the Global fund, we might expect that 70% of our money was invested in Canada and 30% Globally. In reality we would end up with something more like this:

This is a far cry from the 70% we expected to have in Canada and would place us in a position of having more risk than originally desired.  Since the 20% allocated to international is mostly Europe, this would mean a lot of unwanted and unneeded volatility in the portfolio. So how do advisors discern which funds to use? We have a number of reporting tools that dive deep into the content of each of the over 10,000 mutual funds sold in Canada. Sophisticated software allows us to build and compare portfolios that summarize the actual asset allocation, and not just the perceived one. This takes considerable time, but once a suitable portfolio is established we need only continue to monitor it and make periodic adjustments.

Of course, this is just scratching the surface, because there are so many other dynamics that I factor in, such as performance consistency, upside and downside capture, volatility, peer comparisons, and cost. There are literally hundreds of metrics we can use to perform analysis.

Chris is a Chartered Financial Advisor designation with over 20 years experience. He is also a certified divorce financial analyst, life insurance advisor and a private pilot. Chris is married to Melaya and the father of Calvin and Emily.